As can be seen below in the live updating Chart Glimpse﻿ that illustrates our last three months of development, it has been a supremely productive past quarter for Team Amplenote. So much so that we hadn't found the time to write about it﻿...but, back in the shadows, we've been prepping one of our biggest releases to date. Strap in for the full overview of everything shiny and new that has debuted since our last update.

This feature is for the 261 users﻿ who helped us understand how much this feature has helped them become productive in Roam. 🙏 GTD experts like RJ Nestor﻿ have helped us understand how leveraging "contexts" can help sift out tasks to be worked on at a particular location, time of year, state of mind, or however else you separate out what you might want to work on at a given time or place. Here's how the feature looks in Tasks View:

Filtering tasks by Inline Tag in Tasks Mode, as shown on the Inline Tags help page﻿

And here it is in Calendar View, being used to pinpoint the tasks to work on next, regardless of what note they happen to live in:

Inline Tags in "Tasks View" and "Calendar View" joins "Notes View," where we've already been allowing Inline Tags via the Backlinks tab﻿. We're confident that the current implementation (available on web) will serve around 95% of the use cases users have requested. But if there are additional ways that you'd like to be able to filter by note references, let us know on Twitter﻿ or in the comments below. As our longtime users have seen firsthand, user feedback is the North Star we follow to deliver the most utilitarian product possible.

With that top-voted feature launched, our attention turns to the next most requested improvements brought by our users: 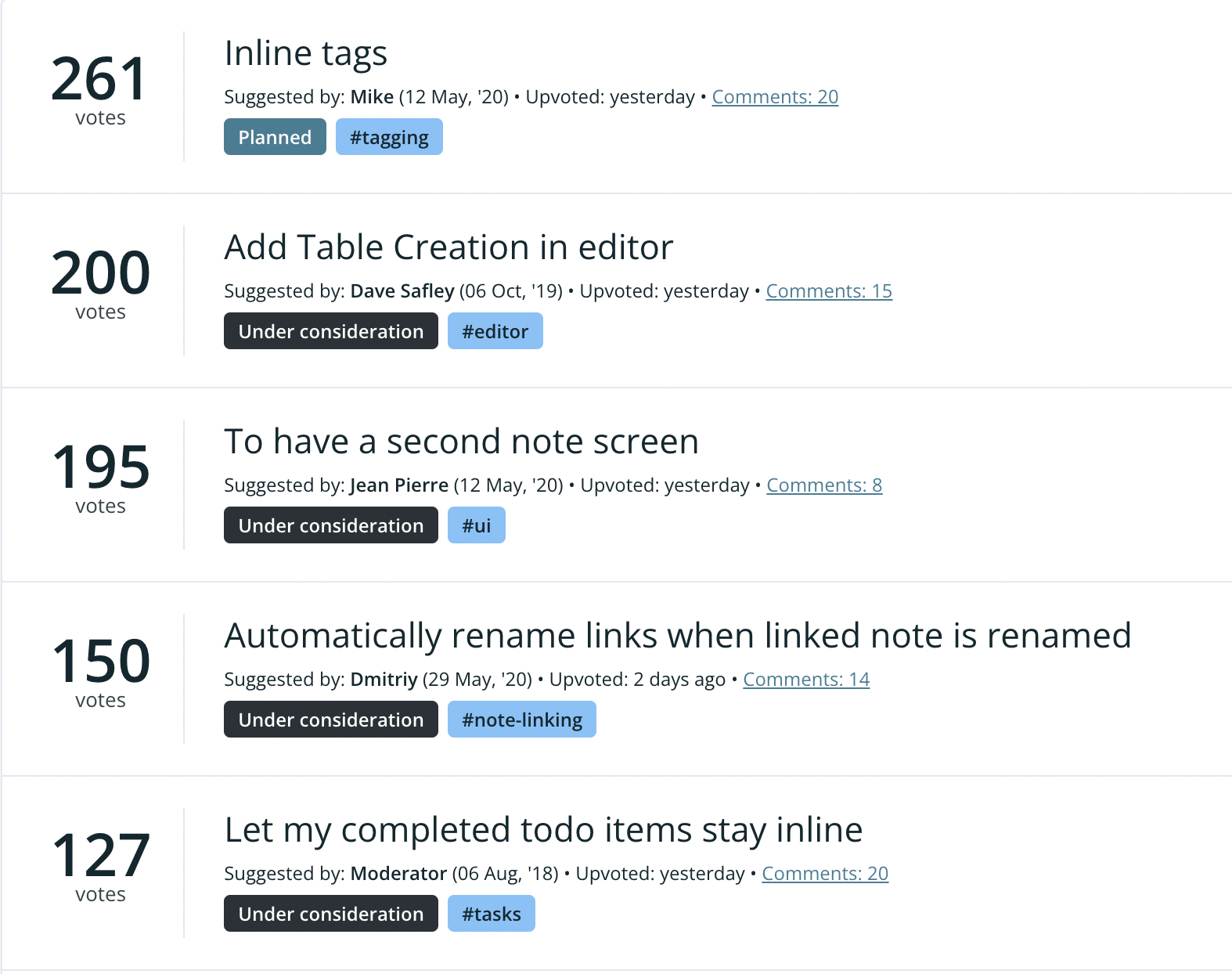 We are delighted to see table creation progressively march its way up the leaderboard, after starting pretty far behind compared to features like Graph View, Second Note Screen, and Automatically Renaming Links. This is a feature that will add so much new leverage in terms of allowing advanced types of formatting, not to mention rudimentary calculations and styling. We plan to start development on it by mid-2022.

"Automatically renaming links when a linked note is renamed" is next on the docket. We expect to have this launched by the end of February, right after we launch the public free version of Amplenote.

It's not lost on us that, in spite of delivering a feature set on web + mobile comparable to today's most popular apps﻿, almost nobody knows that Amplenote exists as of early 2022. We're ready close the chapter on being "the best kept secret" of productivity enthusiasts. Apps like Roam Research﻿, Obsidian﻿, and Logseq﻿ undoubtedly deserve to be celebrated for the unique strengths that each brings. But, by the same token, the general public deserves to know the unique features they're missing out on if they don't try Amplenote. Having notes, tasks and calendar exist as separate islands in different apps means that great ideas get marooned and lost. It forces users to settle for the tacked-on task implementations offered by traditional note-taking apps.

We hope that by launching a version of Amplenote that is free forever, we can open the door to create our own vibrant community of academics, researchers, and other strivers who seek to make daily progress toward their goals.

As Shu Omi demonstrated in his first﻿ and second﻿ Amplenote videos last year (and his newly released "Simplify Your Goal Setting﻿" 🔥🚒), Amplenote is a different beast than the note/task apps that preceded it. Our﻿ users﻿ keep﻿ telling﻿ us﻿ that when they use the Idea Execution Funnel﻿, something special happens. Having a single, fast﻿ app that connects from "idea capture" straight through to "plan of action" unlocks their creative potential. Especially when combined with Amplecap﻿ for instant web capture, or when used to collaborate with groups of coworkers or friends on shared projects using shared tags﻿.

This new version gives everyone the chance to see whether Amplenote lives up the hype. The free plan will lack power features like Vault Notes﻿, Note Publishing﻿, large attachments/PDFs, and some other features﻿. Our company remains shy of profitably, so for us this is a bet that most free subscribers will eventually find it worth a few bucks per month to support us with a paid plan, after we've proven our value to them. But, for those that don't have the means to pay us in cash, we hope the free version will create reason to start talking about Amplenote to friends, family, and followers that might want to unlock their most productive selves.

The free plan is not yet visible on our main site -- that will change soon. In the meantime, here are the details you need to get on board with the Amplenote free plan﻿. ✨ With zero restrictions on syncing to the cloud, or sharing with unlimited collaborators, or using all four of the Idea Execution Funnel modes (Jots, Notes, Tasks, Calendar), we hope you'll find our free offering to be one of the strongest on the market.

Amplenote's referral program got 38.3% more savory this month with the addition of unlimited free months of subscription that can be earned by referring friends and family that go on to become subscribers. Here are the "Very Productive Octopus" t-shirts now available when you invite a friend to get in on the party up in here. 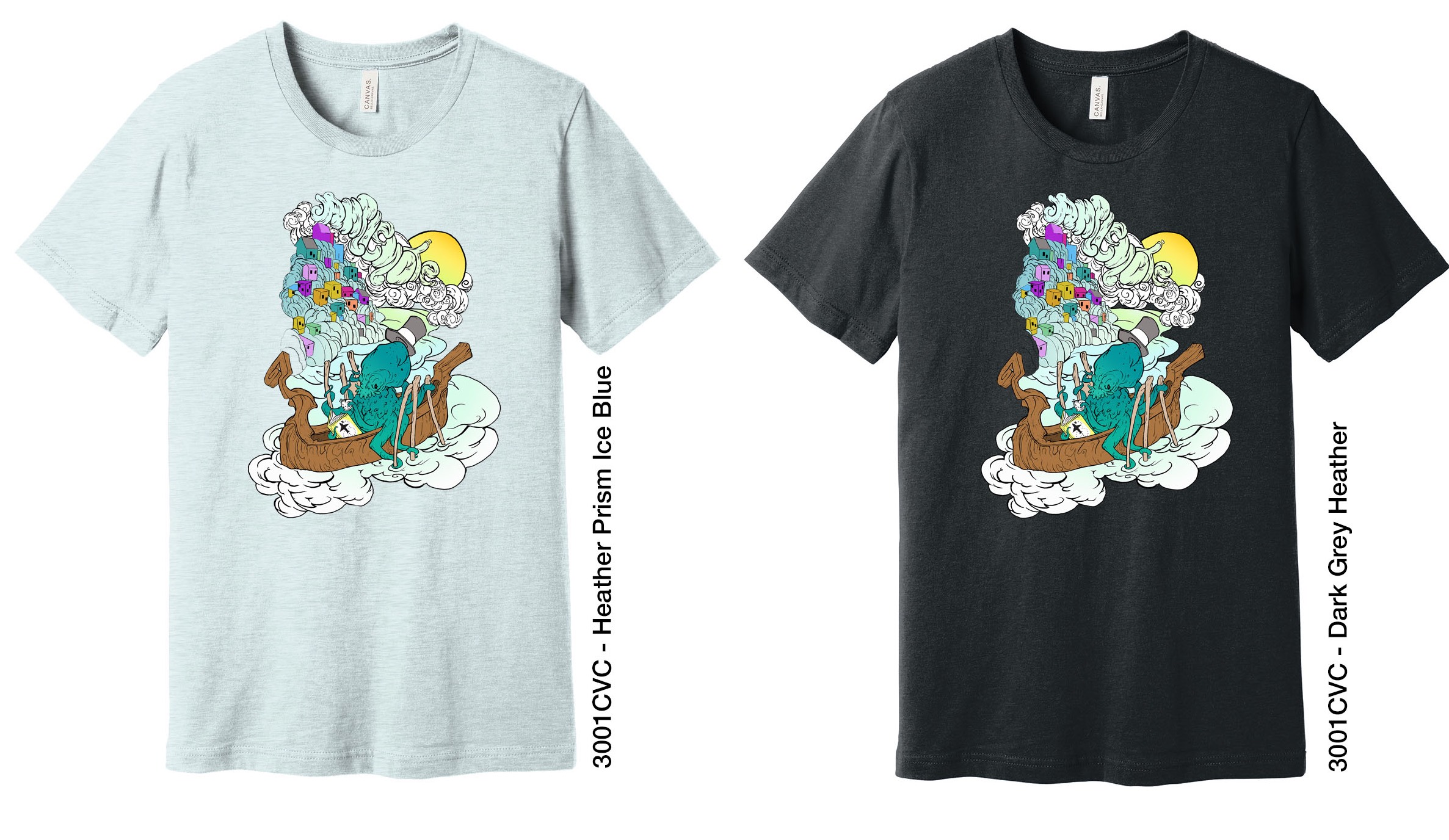 And if you think they look nice, wait until you feel them! These shirts are ridiculously soft & comfy 😊

All we ask is that you do our bidding! 😂 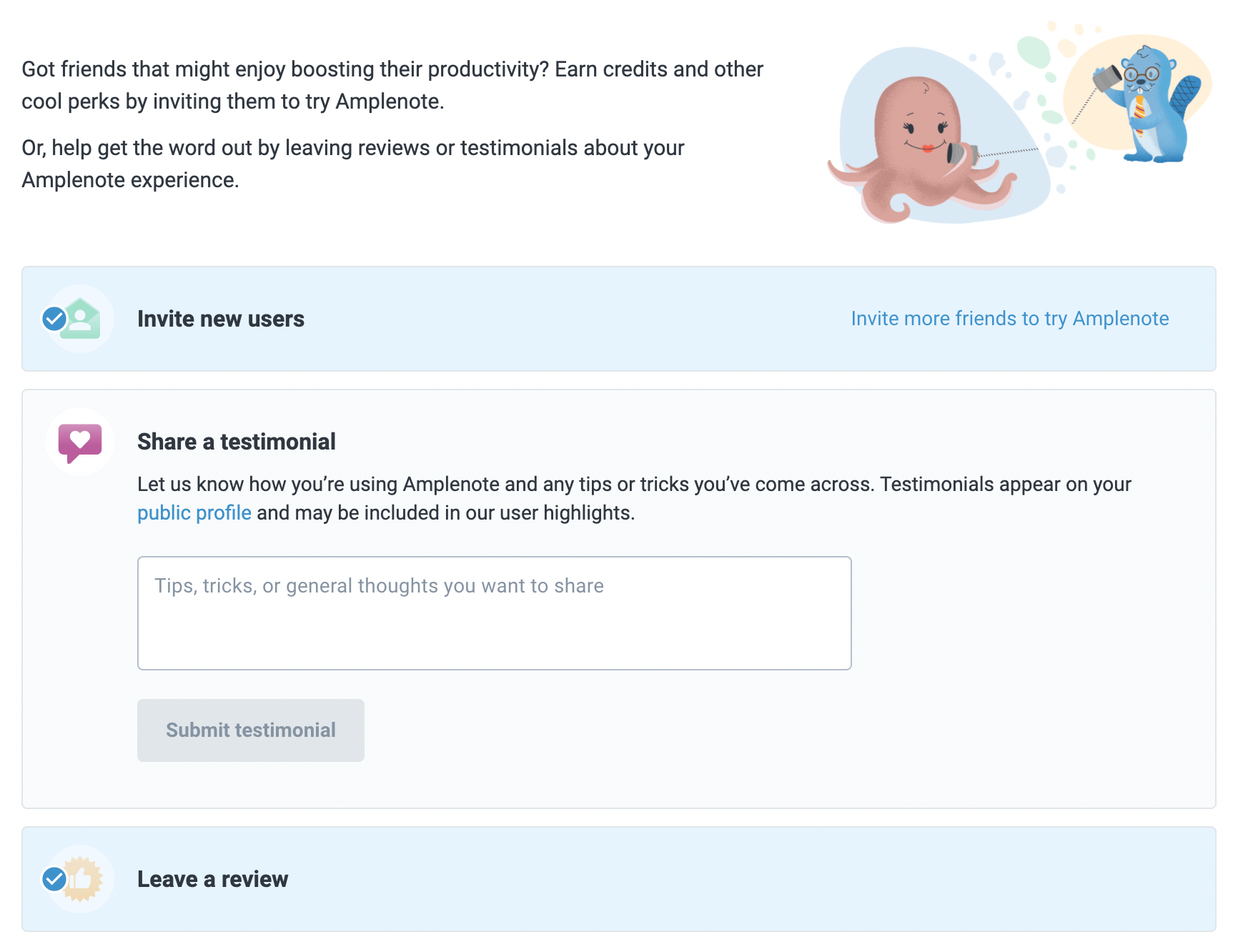 For every user you invite that eventually becomes a paying Amplenote subscriber, you'll receive a $11.99 account credit to take advantage of the full set of features available in our Pro plan. You can find these options conveniently located in an Account Dropdown near you﻿.

linkWhat else is new?

Quite a bit! You know how we roll:

Prevent auto-archiving﻿. If you have a note with tasks that you expect to visit or change less than once monthly, you can ensure its tasks remain in your lists with this new feature. Usually we default to letting tasks in old notes get removed from Calendar and Tasks because interests are ever changing

As mentioned above, you can now visit alloy.dev﻿ and immediately see an up-to-the-hour glimpse of what we're working on during a given day or week. 🚀

Our inspiration these days is driven by Feature Voting, calendar improvements, and a dedicated non-PWA iPad version (though the PWA version﻿ is pretty darned good, in Bill's testing). Among our top user-voted features, the first coming down the pipe will be automatically renamed links. Tables should follow not too long thereafter.

Wow, did you actually read this whole damn thing? With willpower like yours, anything is possible! 🚀

I tried to create an inline tag in a note with "#meeting", but it did not add the #meeting tag to my note. So it seems that either the feature is not "live" yet today, or the implementation did not match my original feature request description at all.
The entire point of my feature request (which I'm proud got upvoted to #1!) was to avoid having to use the "add a tag" extra widget that lives between the note title and the note body. Instead, the goal is to simply be able to type tags *within* a note and have those tags apply to the note so that when filtering by tag, those notes with the inline tag show up in the list of matching notes for the tag.
mem.ai works this way, and it's wonderful.

Hey Mike! Thanks so much for this early feedback. We took our time thinking about how to best implement a version of Inline Tags that satisfied most people's use cases. We arrived at "tags as note references" because it was the most natural development with respect to the existing infrastructure for note linking in Amplenote.

Inline Tags as delivered last month (which you can invoke with the note-linking command "[[") are meant to be applied only to the current "block". That is - when you type "[[my-inline tag]]" inside a Task, for example, only that Task will be tagged with "my-inline-tag", and not the entire note.

However, to refer back to your use case, you can still filter by the tag you applied inline via the existing mechanisms (so far only implemented in Tasks and Calendar mode, but coming soon for Notes mode too). To take your initial example ("Had lunch with #Bob today"): we've discovered that it makes more sense if the tag "#Bob" only applied to the paragraph it is invoked in - which is a valid journal entry you might want to associate with Bob - as opposed to applying that tag to the whole note - which can be a very large journal note referencing a great number of people, meetings or subjects.

The solution to this is to have "#Bob" be a note instead of a Traditional Tag, and link to it whenever applicable. One of the recommended use cases is to tag all of your "people notes" with a Traditional Tag such as "#people", for organisation purposes.

We go into some detail on how note references can function as tags on this help page: https://www.amplenote.com/help/inline_tags_note_reference_filtering#What_are_Note_References?

Let me know if this makes sense.

Hi! Can we at least remember the filter on the task for the Note Tag.
Kind of a hassle to refilter the same tag again all the time.

Even better if we can save multiple filters.

Hey Mark, could you swing by our Discord (link in the footer) and pose that inquiry in the "Questions" channel, so we can discuss what you're after? We can probably accommodate your idea, but it would be useful to ensure we totally understand your use case before we start working on something. :) 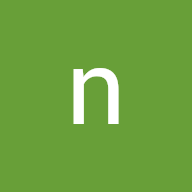 For note/section references, tasks visible in the inline tags preview/popup should be able to be checked-off! Otherwise why bother even displaying them?