Mission: Expression » Our attempt to unify four types of apps into the Idea Execution Funnel 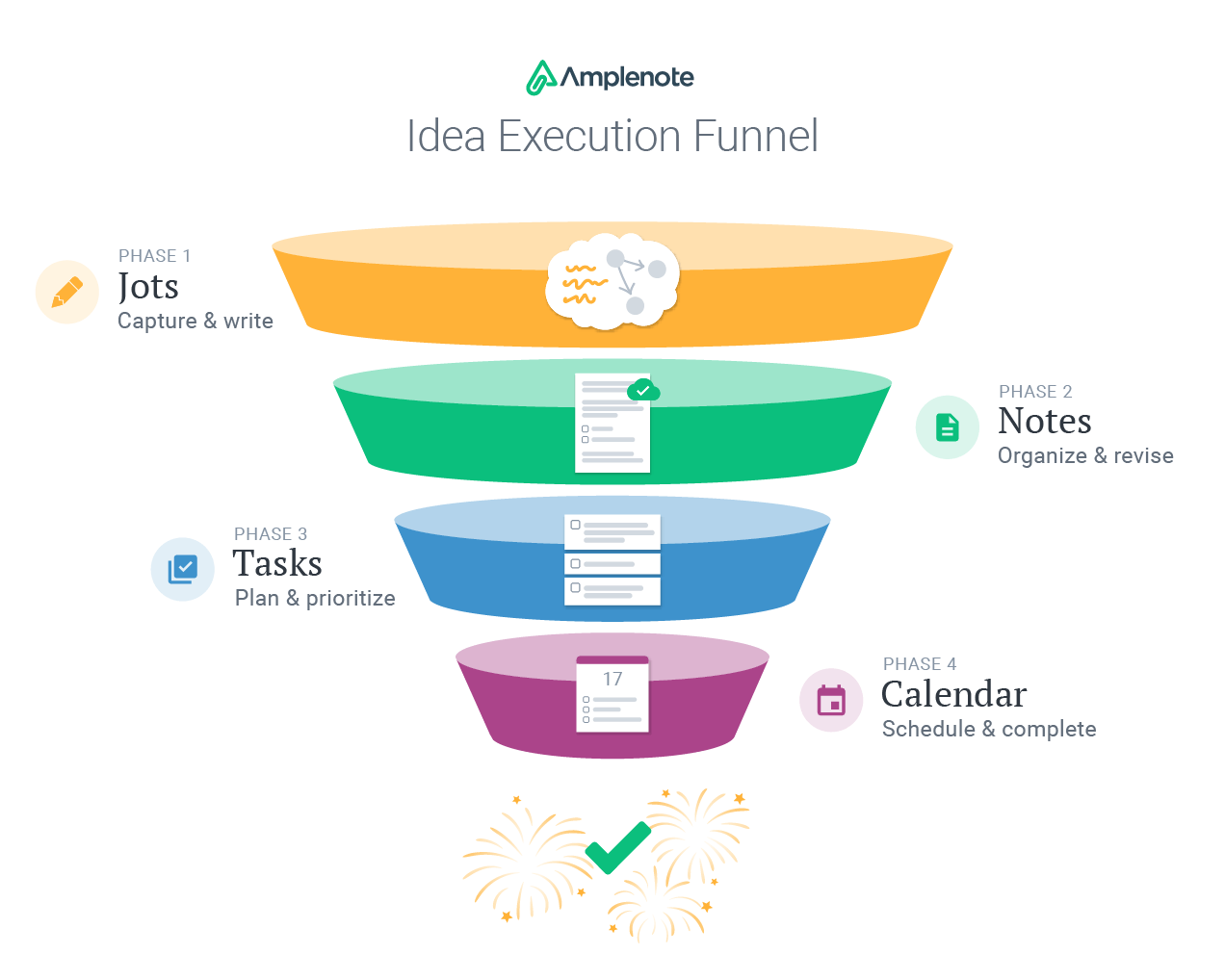 We've come to believe that there are four phases to "idea execution," each of which have their own, largely distinct, app ecosystem:

As of late 2020, there are a lot of smart people shelling out thousands in cash and tens of their hours to be trained by experts in how to allow their ideas to cross between the myriad apps that connect their idea funnel. What if we could skip the expert training and instead use a single source that's adept at capture, refinement, and execution?

Let's review the four phases of creation (and thus, the "four types of apps") that many people scatter their time/ideas across.

In the first phase, the goal is to make it as frictionless as possible to capture whatever the user's latest greatest idea, most recent tweet, interesting article, or whatever else they encounter in the course of daily life that could be handy to have around later.

Apps popular for the write/capture stage include: Raindrop.io, MyMind, Evernote Web Clipper, Google Keep, Apple Notes, Bear, and Roam's Daily Notes. All of these excel at capturing what you want and getting out of the way.

In Amplenote, the "Write/Capture" experience launches today and it’s known as Jots ✨ 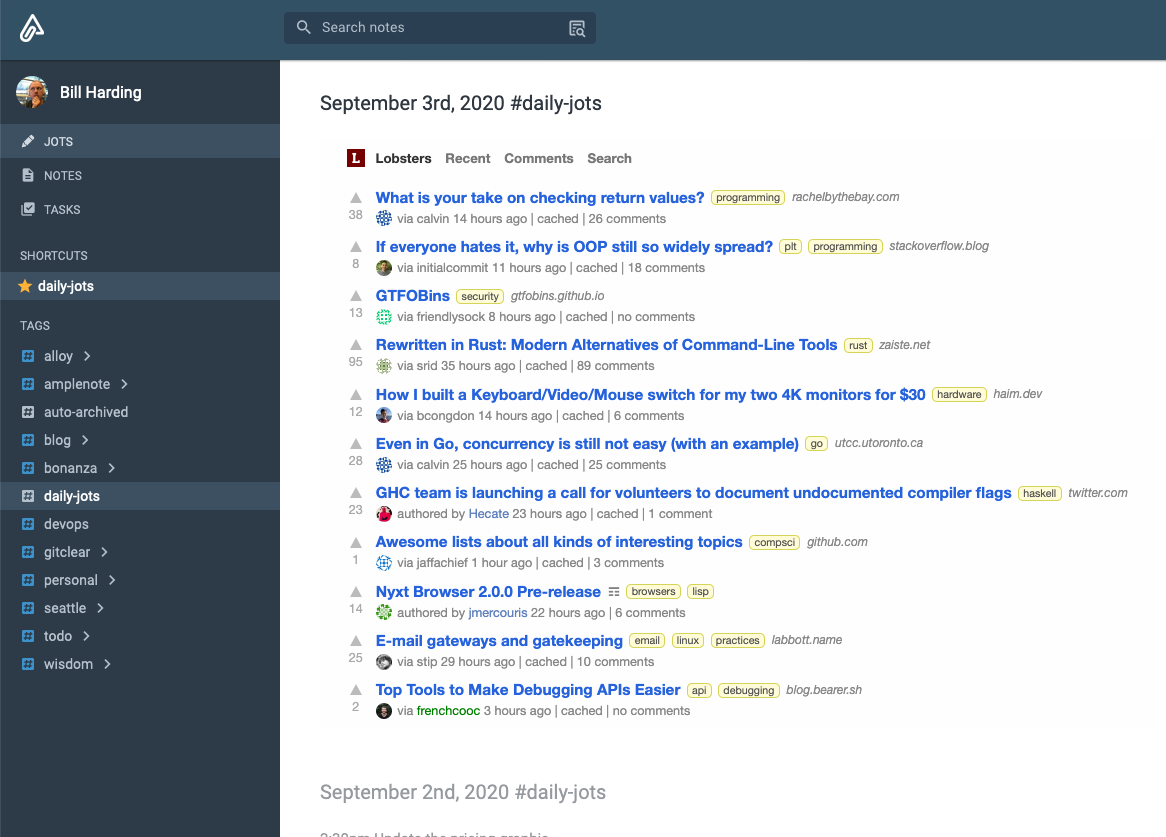 Jots gets out of your way to help you focus on creation. Shown here in two-pane mode (single-pane available), Jots skips the niceties of formatting toolbars, titles and tags.

We have sweated the details with Jots mode to make it clean and powerful. More details about how the mode works are in the final section﻿.

In the second phase, you begin to whittle down the deluge of content from the first phase. Here, the focus is on organizing ideas into areas where your future self can most easily discover them. The ideal experience for "Refine" mode offers sufficient UX to format text well enough to share it as a web page.

Popular apps for refining ideas are the usual note-taking set, including: Notion, Evernote, OneNote, Roam, and Bear. All allow text to be formatted and linked sufficiently to whittle the disorganized stream of thought from Phase One into a form that's ready to be published, shared, or acted upon.

In Amplenote, the "Edit, Refine, Organize, Share" step is known as Notes. 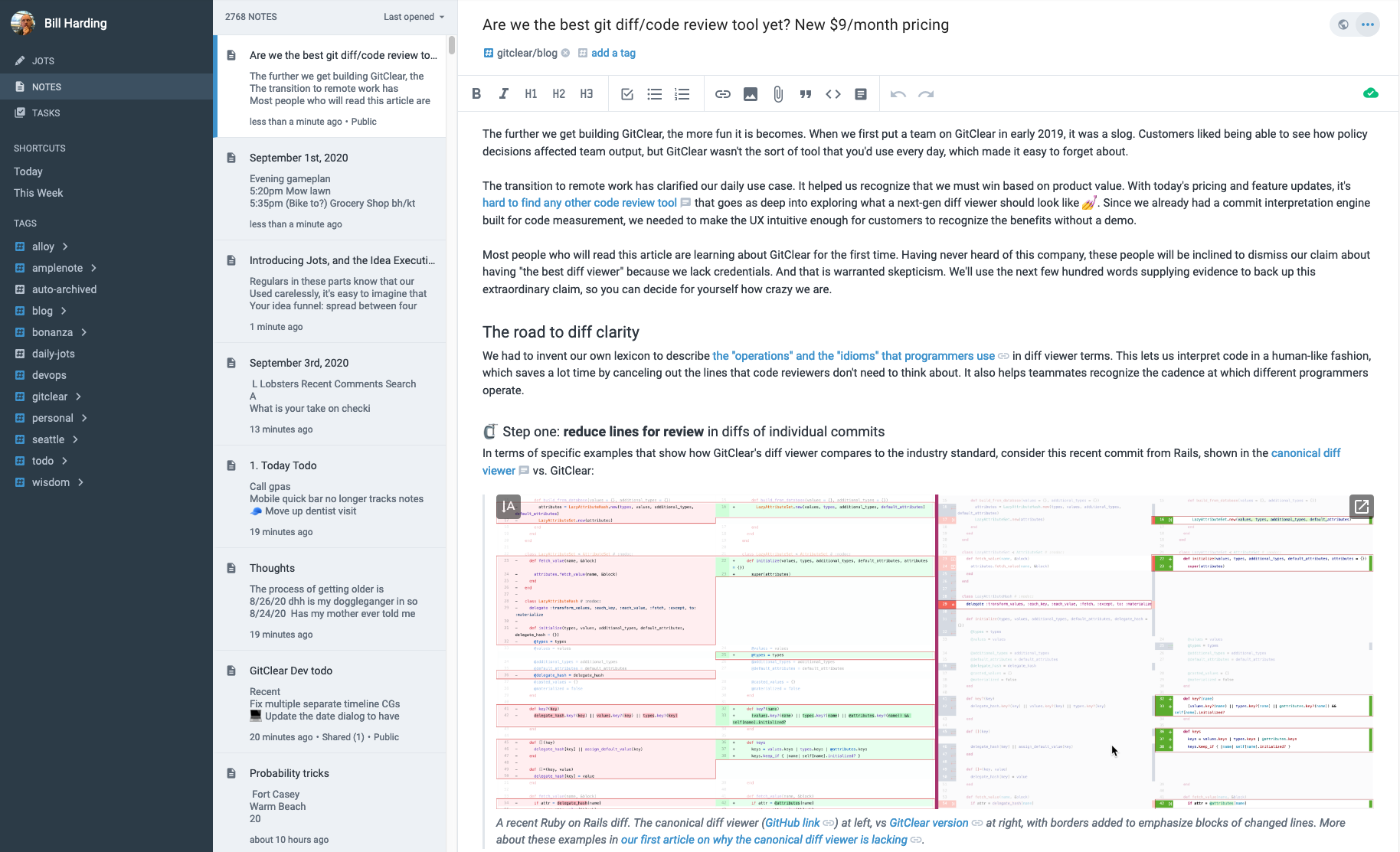 Notes gives you tools to edit note content, organize it into tagged hierarchies, share, or publish (/embed, like the pictured blog about our attempt to make the best diff viewer﻿ 😄)

Amplenote's "Notes" mode lets you make connections between notes with backlinking﻿, so you can form an organic web of connections between your note content. But we don't force the issue. Many "classic" note takers, not to mention Zettelkasten enthusiasts﻿, prefer to create an explicit structure for their note content via tagging. For example, the note in the screenshot is a recent blog post for our GitClear product, so it's tagged gitclear/blog, which makes it trivial to find later.

Once your best ideas are identified, what to do with them? This is where most note taking apps exit stage right. Yes, all of the popular apps listed above offer their own rudimentary solutions for todos. Invariably, these implementations lack even the most basic functionality that real world use requires. No task recurrence. No history of past tasks complete (except to the extent the user fashions their own bespoke system). Little-to-no ability to extract tasks from the notes in which they reside. Todos in note taking apps are just a sad lot.

When ambitious people decide they want to create and manage tasks like a pro, they must turn to a third set of apps. Popular to-do list apps in 2020 include Things, Todoist, MinimaList, and Google Tasks.

In Amplenote, the "Make it Actionable" step is labeled Tasks, and it shows you every task from any note with a particular tag (or in a particular date range):

"Tasks" mode allows browsing to the different "productivity centers" in your life, which can be made into Shortcuts for easy access. For example, I've setup Shortcuts to my todo lists for "Personal" tasks (hobbies, family ideas, errands), "Alloy" tasks (mostly business), and programming tasks

Amplenote's Tasks mode is a hit among the action-oriented. This isn't about collection, research, or refinement -- it's about getting shit done. Specifically, it's about working on (or intentionally dismissing!) the most Important tasks that your past self identified. Not just whatever came up recently. "Tasks" mode helps disciplined users realize their long-term ambitions while not letting urgent or due tasks fall through the cracks.

Every task in Amplenote comes standard with recurrence built-in, plus a mini-Eisenhower matrix﻿ so our Task Score system can use the wisdom of your past self to present the task to your present self when it will be relevant to your current context (e.g., hobby-related tasks in the evenings).

link📆 Get It Scheduled, Get It Done. "Calendar" in Amplenote

Just because you have an organized list of what should get done doesn't mean that it's going to get done. The most productive people of our generation, such as one Elon Musk, don't leave their fate in the hands of the lowly todo list. Productivity maximalists need to know when the task is going to get done. In Elon's case, he wants to know what he'll be working on down to five minute increments﻿. 😳 If that’s what it takes to get to Mars, go get em buddy.

The apps that people tend to rely on for scheduling are Outlook, Google Calendar, and Apple Calendar.

In Amplenote, the "Get It Scheduled" step is going to be handled by the Calendar, coming later this year: 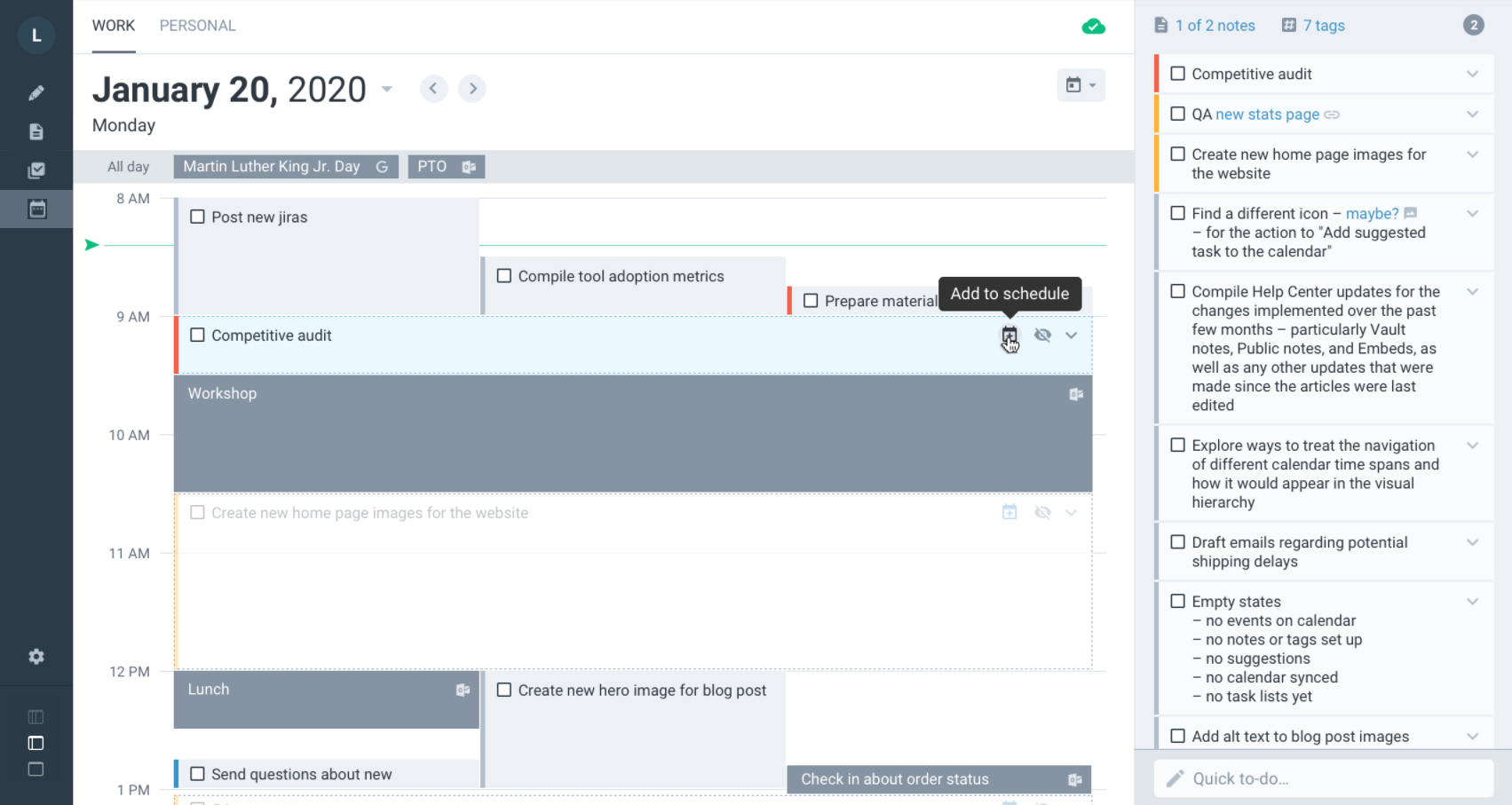 The last step in the idea funnel is getting it scheduled. Amplenote will offer suggestions on what tasks to schedule by suggesting groups of related tasks together (e.g., answer these three emails)

As of today, Amplenote's vision for task scheduling is partially complete. You can already connect Amplenote to your Google or Outlook calendar﻿ to serve as the viewport for the tasks you've scheduled in Amplenote﻿.

"Tasks" mode is the easiest way to find contextually relevant tasks to tackle﻿.

linkWant to try it yourself? Importers (and a first-class exporter) await

Our users keep writing tweets like this, and it makes us feel like we're probably not doing a good enough job of shouting from the rooftops about Amplenote: 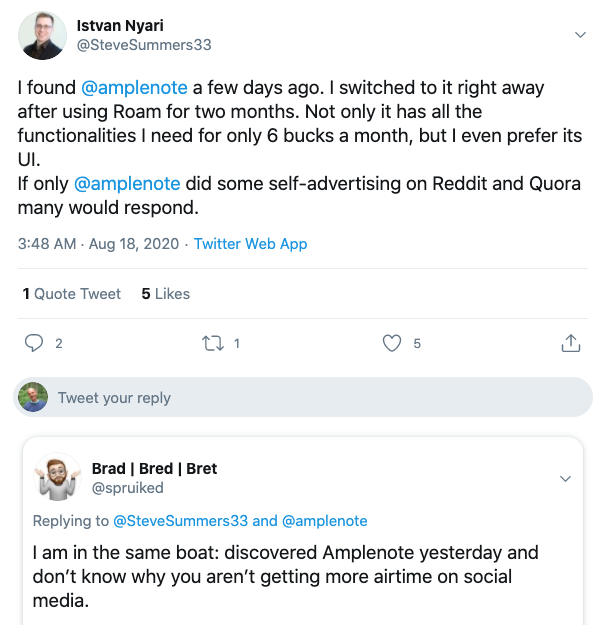 Our reckoning is that Amplenote's lack of growth is probably some combination of us spending too much time building our product, and too little time getting Twitter hyped up about it. It doesn't help our cause that so many of the experts in the field, who might normally take interest in an interesting new product, have almost exclusively covered Roam﻿ for almost a year now. Not difficult to imagine that certain allegiances have taken shape during this period.

That doesn't mean that users can't take it into their own hands to explore Amplenote. We offer importers for Evernote, Roam, and markdown (e.g., Bear)﻿. And we are committed to a first-class export experience﻿. We don't officially offer a "free" version because we're a non-VC company that lives on product profitability, but we also don't prevent using Amplenote when a user signs up via our website and their 15 day trial lapses. At some point we'll restrict some features for those with expired trials, but it's a pretty low priority for us relative to building the best product for realizing long-term goals.

linkMore about "Jots": the entry point for getting things done 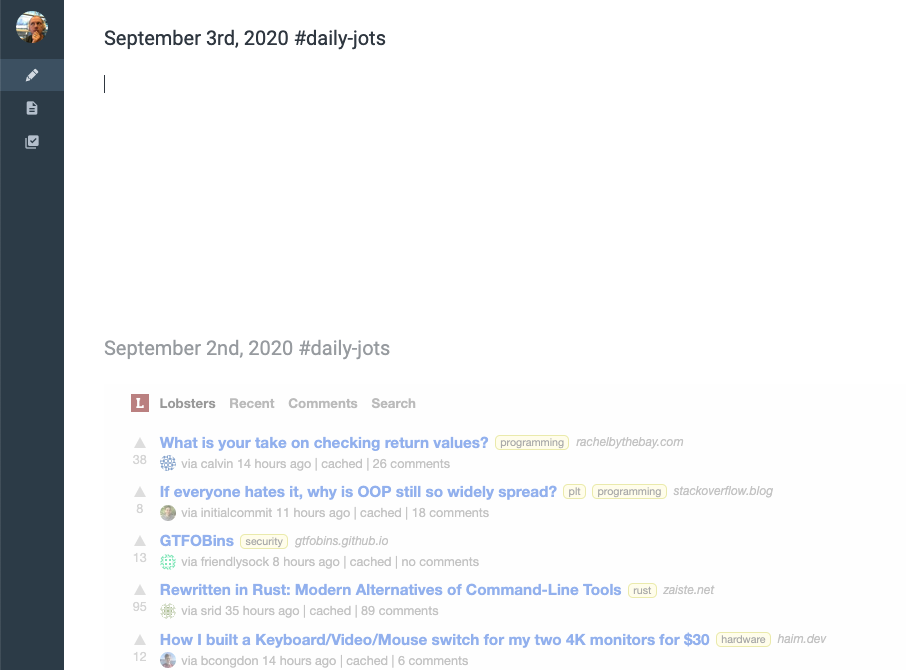 Regulars in these parts know that our product roadmap is biased toward requests that are popular among our users﻿. As of July 2020, the most popular pending feature was "Add daily notes automatically like in Roam." This feature's inspiration has clearly been transformative for many users, but it comes with some warts we wanted to avoid.

For example, the fact that daily notes scatters ideas across dates, so are naturally forgotten as days pass. In a sense, this a feature of daily notes, in that their ephemeral nature implicitly clears out past ideas that weren't worthy of follow up. But you're bound to lose some wheat in the chaff. A better system sweeps up past ideas from daily notes so you can explicitly dismiss or promote the good ones, instead of having them disappear.

An even more problematic aspect of "daily notes," when they're used as task list (as often the case), is that they can reaffirm the already-powerful human bias toward focusing on whatever's most recent﻿, at the expense of what's important.

Still, the notion of daily notes has clear & powerful benefits. There's a reason that simple apps like "Google Keep" and "Apple Notes" beat Notion in daily active users. When you want to quickly capture an idea, you've got no patience to fuss with figuring out where to put it? or what to name it? You want a fast, clean, immediately available palette upon which to cast your idea right now. For this method of creation, daily notes shine.

It's also just really nice to start a new day and have a cursor sitting there, awaiting your input. So we've built that, and we're calling it "Jots." But then we asked: how does Jots fit into a bigger picture of helping motivated people set & realize their goals?

Here are the cornerstones of what we seek to accomplish with Jots (or "Daily Notes") as a capture/creation mechanism:

⚡ Immediate. When opening the app, the cursor is ready and waiting for your keystroke. No prerequisite BS like naming the note, choosing tags, or picking an emoji to represent what you're going to write about.

💅 Clean. We show the least possible UX so the your text, tasks, and images do the talking.

💪 Powerful. Create a task in a daily jot and you can always find it by visiting "Tasks" -> daily-jots. Those tasks can be snoozed until later, set to recurring, due at a particular date (put on your calendar), and more. We believe the ideal Jots experience feels akin to using a great CLI﻿: a clean UX combined with a powerful set of features that can be discovered and invoked.

🔍 Focus. Sometimes you want to focus your thoughts on a particular topic: your business, hobby, family, etc. We must make it easy to capture ideas that pertain to areas of special interest (e.g., work/bird-project, hobby, family). Just navigate to your topic of interest in the left sidebar, and voila! You're now jotting about that topic﻿. Any tasks you create will be available by browsing that tag within "Tasks" mode.

🔮 Predictable. "Consistency" and "predictability" go hand in-hand, with the former acting as a powerful shortcut to help users anticipate how to accomplish their objectives without reading instructions. The Jots -> Notes -> Tasks -> Calendar framework is a logically consistent abstraction, made more powerful by being able to focus on a particular context from whichever mode.

linkHow are you using it?

If you're already using Amplenote as a to-do list, we'd love to hear more about how it's working for you. Drop us a line on the Twittersphere﻿?