We’ve gotten a little behind on posting product updates while tending to the launch of NoteApps.info﻿. For those who are considering jumping between note taking apps, we’d strongly recommend taking a gander at that site before finalizing your decision. We’ve been funding the large scale data gathering effort to catalog thousands of screenshots and features spanning across 12 apps and counting﻿. We aren't yet the “best” note taking app as gauged by NoteApps (some familiar names make up the top three﻿), but at least we have growing advantages when it comes to task lists.

Meanwhile, when it comes to Amplenote developments, the biggest launch from the last few weeks has been the debut of mobile Jots﻿! ✨ Working alongside the Quick To-do bar﻿, Jots on mobile makes it super fast to capture your ideas without fussing about note titles or tag names. Let's take a closer look. 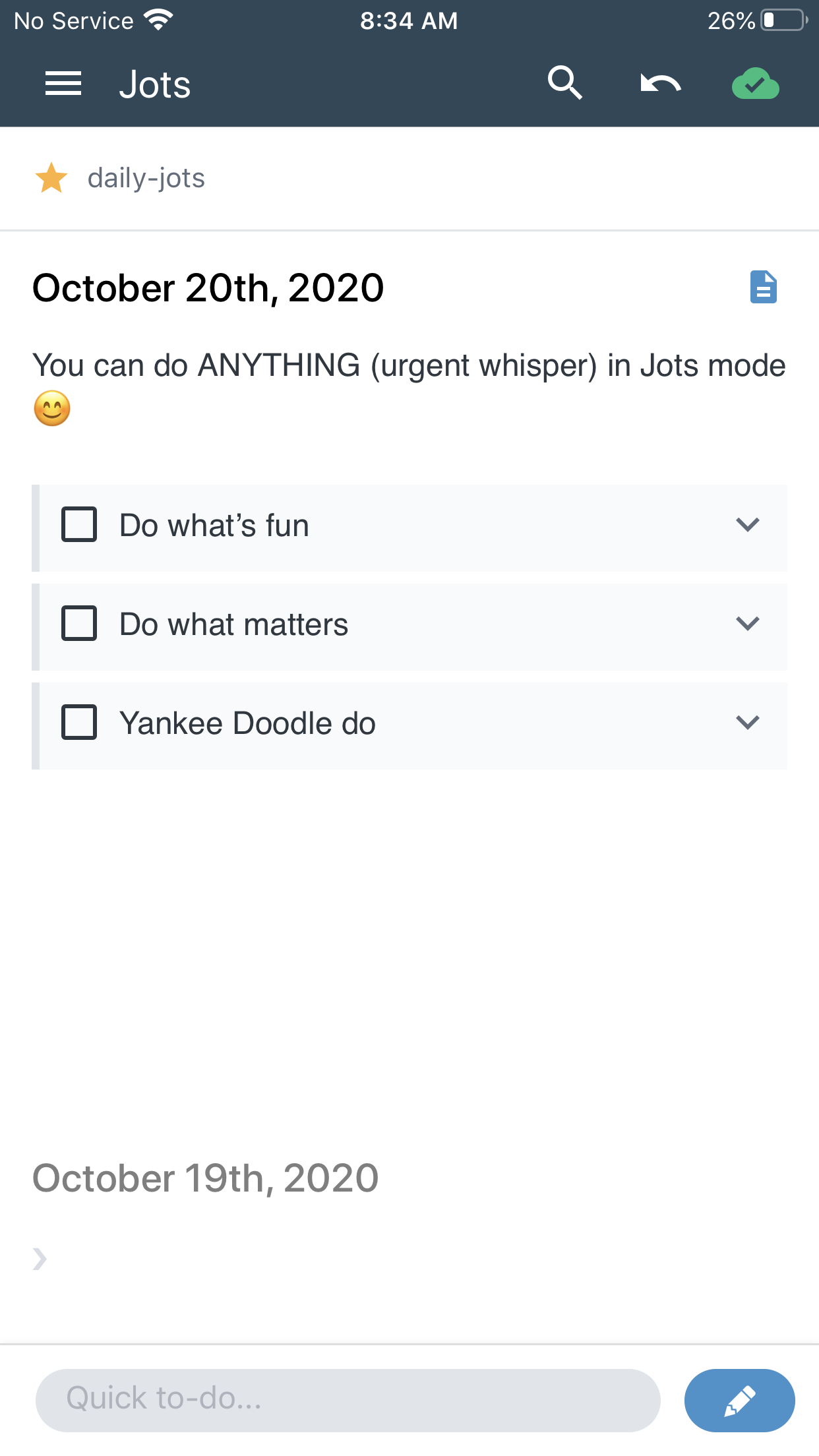 We’ve been dogfooding Jots since their inception, so our team is just as excited as our users to get access to this feature across the mobile platforms: iOS, Android, and iPad.

When it comes to using a Jot as a task list, we continue to view them with a wary eye. A list made each day will tend to dwell in the domain of "new and shiny" (aka "recent"﻿) at the expense of important tasks. That said, it has become increasingly clear to us that the perfect to-do list is a drag﻿. Creating a daily task list has a decided advantage over a long-term task list in the domain of “zest with which the list is undertaken."

That's why we've come to believe that Jots are integral to maximizing long-term productivity, even if they do contribute to the creation of important barnacle tasks﻿.

Another feature that has been a long time in the making is Task Commands﻿. It's activated by the hotkey, !, which gives rise to a number of new conveniences: 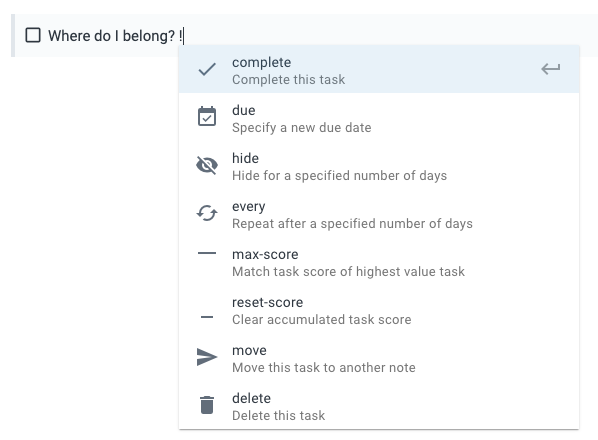 The action that spurred us to finally tackle this was move. Currently it's possible to move tasks (or task hierarchies) between notes by dragging them, but when the note you want to move the task into hasn't been opened recently, it was a pain to move a task into the old note without losing the task details﻿.

Now it's easy. After choosing move from the menu:

You'll get our usual quick open dialog to pick a new home for this task: 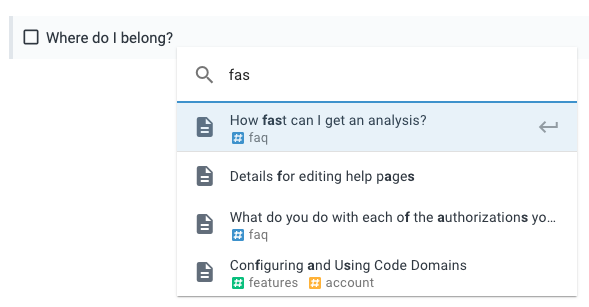 After choosing the note, the task is moved to the top of that note. 🚚 😎

In preparation for our calendar development to get underway, we've added a new convenience for heavy task list users. Now, when you setup a task to start later, you no longer need to choose a specific time for it. You can just choose the general part of the day, like "morning," "afternoon" or "evening." We call these parts of the day "fuzzy times." They look like this in Amplenote: 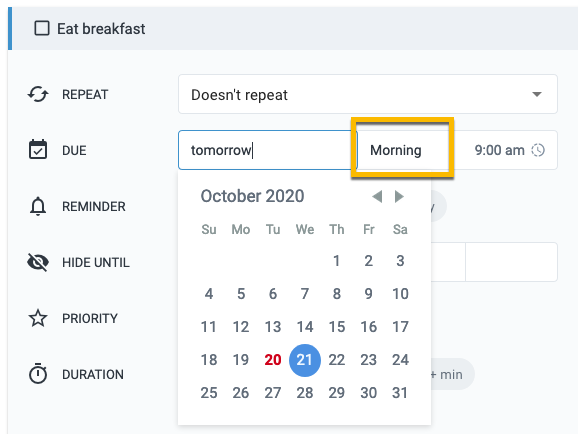 If you want to choose a specific time for when your task is due, everything works the same as before.

But if you have a mix of tasks with and without a hard due time, then leaving the date in its fuzzy state lets Amplenote shift around the scheduling of other tasks so that you don't end up with overlapping events scheduled to your calendar.

Another way to think about it: when you use fuzzy times, we sprinkle in your flexible tasks around the "anchors" in your schedule -- the events that have hard due times (think "meetings" or "homework").

As an example, the "Eat breakfast" task shown in the screenshot above would be scheduled for 9am by default. But what if you were already scheduled to dredge the channel tomorrow at 9am? Thanks to fuzzy start times, Amplenote schedules breakfast for 8:30am tomorrow, so that you can report to the creek with your dredge at 9:00am sharp.

Who does a Help Center call when it needs help? 😆 A month ago, our Help Center﻿ was in pretty sad shape, lacking any of our features launched in the past 9 months. We decided that enough was enough, opened up Amplenote, and rewrote the Help Center in a few days' time﻿. It now has about twice as many articles, with most all of the older content freshened to more recent screenshots. 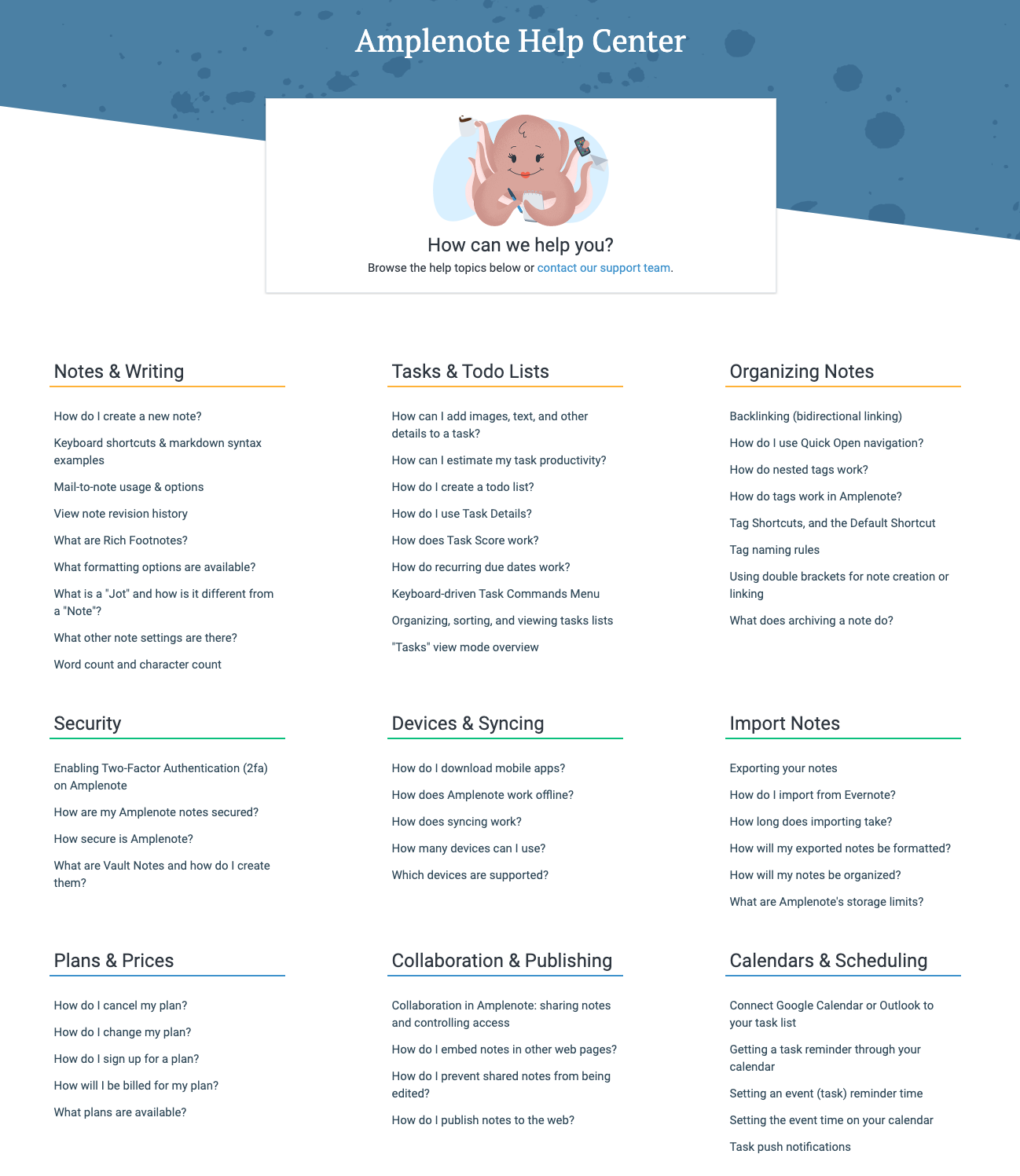 It was fun to see how many features had evolved since v1 of the help pages was created a year ago!

Even though the point of Amplenote is to build a product simple enough that reading the help pages is unnecessary, these improvements should be handy to new users who want to become Amplenote experts quickly.

The first draft of this blog post is being created on an iPad Pro, a device that is now much better supported than it had been in past releases. Gone are many of the rough edges, including not taking advantage of the iPad's Retina display. If you are an Amplenote iPad user, make sure that you’ve grabbed the latest version from the App Store.

As illustrated above, when we get behind on blogging for a few weeks, it's a lot of work to catch up with the speed at which our product evolves. Here are some of the features we're planning to tackle in the next couple months:

Better backlinking. We're aiming to support the superset of backlinking features offered by Roam and Obsidian, including backlink filtering and sorting.

Rich Footnote improvements. Including being able to embed Youtube videos and Tweets. And linked text from within Rich Footnotes.

Sync shortcuts between devices. Currently Shortcuts are stored on a per-device basis, but we'd prefer to have them persisted on a per-account basis.

Collapsible hierarchy. Many users find it easiest to think, explore, and focus in hierarchy form so we will soon support this as a mode of creation.

Amplecap. We're kicking off a project to rebuild our Chrome extension from the ground up to be on par with the best web capture tools available. We're hoping to surpass parity with Evernote Web Clipper somewhere 3-6-months-from-now range.

Apologies that it's a bit lighter on the voting board features, and no calendar launch in sight quite yet. We have a long-term plan for how we will go about launching these. It makes most sense in the context of that plan to focus on polishing our existing features over adding new ones for the next couple months.

One final word: thanks again for continuing to tell your friends about Amplenote! Without advertising, and with minimal social media presence, we've seen a several month streak of 30%+ growth in paying customers. We deeply appreciate the faith that our users have placed in us and we shall continue to humbly appreciate mentioning us to your friends. 🙏

Lontok said about 2 years ago

Mobile Jots is still too clunky and slow. What do I mean?

Let's say I got a random idea in my head, and I have my smartphone (Android, by the way) with me. I whip it out, unlock it, open Amplenote, press the burger icon in the upper left, press Jots, press the current day, and start typing. That is a LOT of pressing to get my idea in. At the very least I would suggest adding another button on the QuickMenu at the bottom that automatically opens the Jot note for the current day. Also a widget would be very nice that either opens the current day Jot note or opens a UI where I can add text, pics, recordings etc.

Or another scenario: I am watching a video or surfing on my smartphone when I come across an interesting article or tutorial video. To remind myself to take another look in it I would need to do the whole procedure I outlined above, which again is a LOT of clicking. Adding Amplenote to Android's share button would have helped a lot.

I understand it is a fairly new feature, and I will of course add a feature request for these. However Jot as of now in Amplenote mobile is not accessible because of its clunkiness and I am currently using a notepad app for its supposed use.

Lucian said about 2 years ago

We definitely have a solid list of improvements to enhance the mobile apps. We have mobile share sheet, widgets and quick-input on our radar and we will eventually get to them.

In the meantime, check this help article detailing a workaround for sharing content from mobile: https://www.amplenote.com/help/mobile_share_extension

We appreciate the very helpful feedback and the feature request on the leaderboard!