I guess this is what happens when we don't write an update for two months... we've accumulated a very long list of product improvements that are either already live, or set to go live in the next two weeks. Here's what has been keeping us busy lately...

Previously when you tapped the checkbox to complete a to-do item, it was often ambiguous whether you had successfully completed the task, because there were no visual cues to indicate whether the tap hit the mark. With the mobile app update released on May 12th, we've resolved this ambiguity and added a little sizzle by animating the removal of tasks on mobile and desktop:

This also came with fixing an obnoxious bug on mobile that prevented tasks from being completed until the cursor was located in the task. 🎉

Continuing on the theme of improvements to mobile, we've been gearing up to release the mobile version of our calendar, to accompany the recent launch of calendar on desktop. 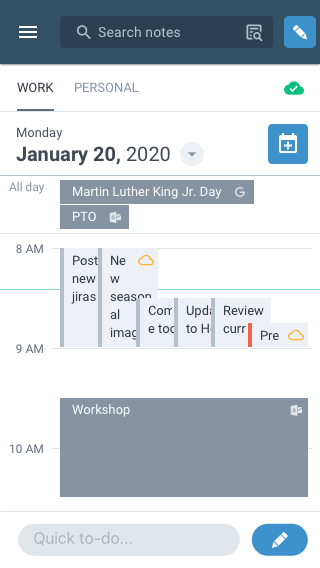 Viewing a Task Domain on mobile

What can we say? We're pretty damn excited by the chance to offer a cohesive experience for translating to-dos into scheduled events, regardless of your preferred mobile or desktop platform. Mobile calendar should be live in the next release of the mobile app, probably around June 4th or 5th. 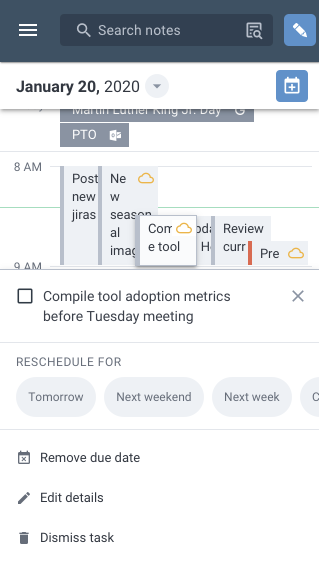 Rescheduling a task from mobile

This has been high on our leaderboard﻿ since we launched the leaderboard. We are now on the cusp of offering the ability to expand and collapse nested list content.

And since we're Amplenote, of course it also works with tasks:

Tasks are expand/collapsible, by click or by using hotkeys Cmd-< or Ctrl-<

We believe that collapsible list items will unlock new realms of possibility for those who think or plan via hierarchy. Collapsible content is set to make its debut in the update after mobile calendar, sometime on the week of June 6th (or potentially the week after depending on final QA passes that are underway).

Since we were already making changes and improvements to groups of list nodes, we thought it would also be nice to allow Workflowy-esque selection of child list nodes, so it's easier to use drag and drop to rearrange lists. Previously, if you selected through two list items, you'd end up with a weird partial selection that did not lend itself to drag and drop﻿. Now, we will automatically select full list items to make selecting groups of list nodes fast and convenient:

Once you've selected a group of list items, you can now drag it into an existing hierarchy and have the dropped content adopt the indentation level of surrounding list items:

These improvements will go live alongside the collapse/expand release.

linkCompleting and dismissing groups of tasks

Select and complete groups of tasks in one fell swoop

This can be especially time-saving when you want to mark all the tasks in a hierarchy as complete.

When a locked note is the first result in Quick Open, you'll be given the opportunity to create a new copy of the note from the existing

We've also added the capability to create your own gallery of quick-access templates by using links to create notes. You can read about setting up such links in this section of the help page﻿. Here's how that looks:

Since the previous update, we've pushed a comprehensive update of Amplecap for Chrome﻿, that includes the ability to capture web content into Rich Footnotes﻿. In the next week or two, we are on track to launch Amplecap on Firefox. We will post a link on Twitter once we have a build available (update: beta version now available for Founder subscribers﻿). The initial Firefox version will include all the functionality currently available in the Chrome extension, which includes selecting partial screenshot, full page screenshot, page excerpts, and page URL.

As of late May, it's now possible to use the Amplenote Help: Using Double Brackets [[ for Note Creation/Linking﻿ to link to sections within the current note. There are two main use cases we foresee for this feature. The less common use case will be when you're creating a long public note and you want to create a Table of Contents.

The main use case is for users who want to keep the context surrounding a task visible from Tasks View or Calendar View. This makes it much easier to recall all of the notes that you took surrounding the task: 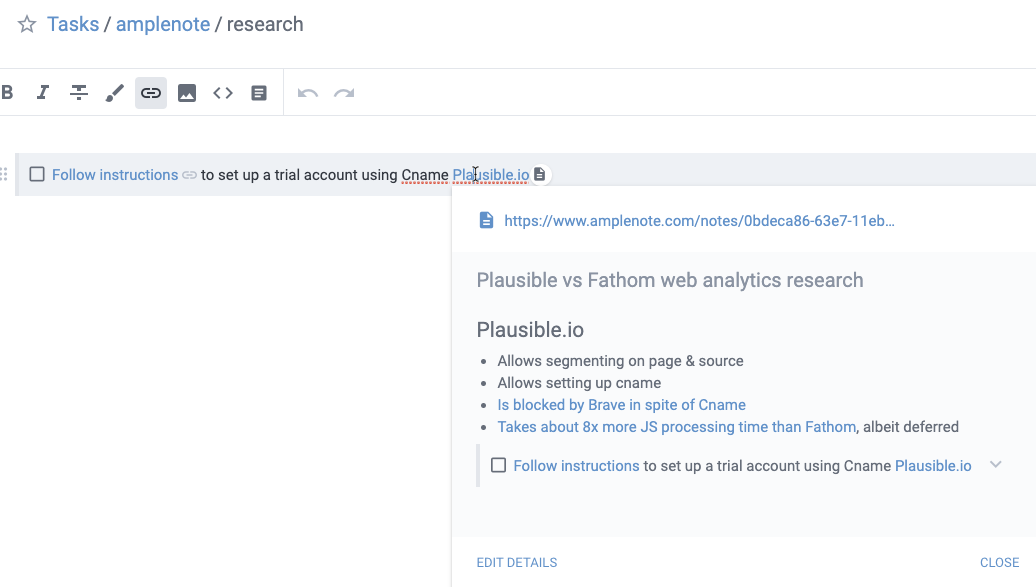 Check out the new example on our Double Brackets help page to see a video of linking to the current note section﻿.

It has been an exciting couple months of progress for us! We expect that momentum to continue over the Summer. Here are a few of the new tasks we're looking forward to tackling after we've launched all the above:

Mobile dark mode. In the process of adding calendar to mobile, we've set up the infrastructure to finally enable dark mode on mobile. We're hoping this will go live by mid-June.

Completed tasks left on calendar. Currently, completing a task removes it from calendar since it no longer needs to get done. However, in many cases it would be preferable to leave the task behind as a record of where time was being spent this day/week/month. This is going to be a fairly complex change, but once it is in place, we will be a big step closer to being able to create a page dedicated to allowing users to browse and navigate their past tasks they've completed during a particular time range.

Tasks scheduled from other Task Domains shown as reserved time blocks. Currently, when visiting a Task Domain, we only show tasks associated with the notes and calendars that were configured in settings. In the interests of preventing overlapping tasks, it would be preferable if we made it obvious when a range of time was already scheduled by virtue of a task from a different domain.

Beyond those, we'll be looking toward what our users are voting for, as always. 😇 One task that has been especially close to Bill's heart lately is allowing tags to be renamed, deleted, and otherwise managed﻿. But obviously the second note screen and inline tags are very high on our wishlist as well. Stay tuned.